While many organizational lessons are captured within the text of How Google Works, the most actionable takeaways from the book focus on structuring hiring processes and the general work environment so that employees feel valued, free to think critically and creatively, and motivated to work towards a common goal.

Eric Emerson Schmidt--former Chief Executive Officer (CEO) of Google for more than a decade--was born in 1955 in Falls Church, Virginia. After earning a PhD from the University of California, Berkeley in Electrical Engineering and Computer Sciences (EECS), Schmidt went on to hold leadership positions at several technical companies, including Sun Microsystems, Novell, and eventually Google, where he assumed the role of CEO in August, 2001.

Throughout his tenure at Google, Schmidt is credited for turning the Silicon Valley start-up into a multi-dimensional, global force, while overseeing the company’s founders--Larry Page and Sergey Brin.

After 19 years, Schmidt has left his most recent role at Google--technical advisor--and will now be working with New York Governor Andrew Cuomo by chairing a commission aimed at updating the state’s technological infrastructure in response to the COVID-19 pandemic.

Jonathan Rosenberg--former Senior Vice President (SVP) of Products at Google and current advisor for Alphabet Inc.--was born in 1961. After receiving a Masters of Business Administration from the University of Chicago, Rosenberg entered into the technical sphere by becoming Vice President of Software for palmOne, a now-defunct Sunnyvale, California-based manufacturing company that developed communications solutions at the height of the “dot-com bubble”.

After stepping away from his role at palmOne, Rosenberg joined the Google Corporation in 2002. In his position as SVP of Products, Rosenberg oversaw multiple products on both the consumer and advertiser sides of the business, including Gmail, Android, and Chrome.

Rosenberg resigned from Google in 2011 and he now serves as the Chief Operating Officer (COO) for Motorola Mobility, a consumer electronics and telecommunications subsidiary that manufactures smartphones and related products.

In addition to How Google Works, Rosenberg has another published book--Trillion Dollar Coach--which was released in 2019. 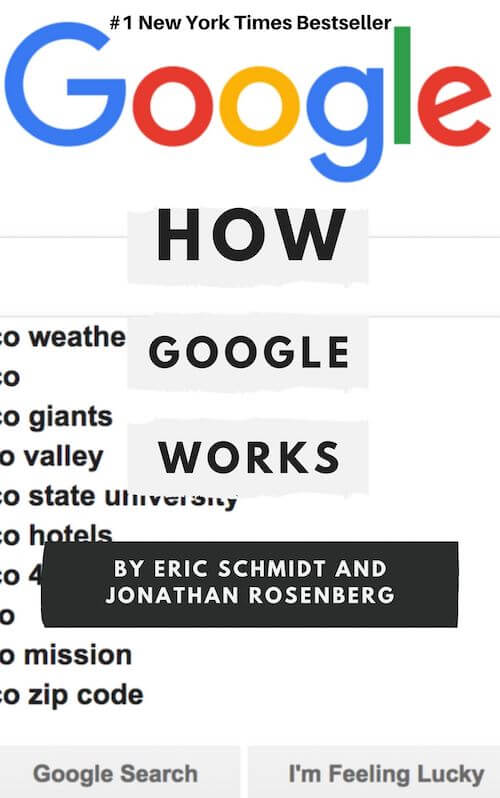