The 48 Laws of Power

In order to gain power, leaders must focus on the relationships between them, their competitors, and their followers. They must be manipulative, unpredictable, adaptable, and practice selective honesty to remain in control and on top. Leaders must appeal to their follower’s greatest fantasies, beat the competition, and cultivate their relationships using a variety of strategies.

Robert Greene is an American author known for his books on strategy, power, and education. He is the author of six international bestsellers.

He worked 80 jobs before becoming a writer. In 1995, he worked as a writer in Fabrica, an art and media school in Italy, and met a book packager named Joost Elffers. His pitch to Elffers became the book The 48 Laws of Power, which focuses on helping people who want power, observe power, or protect themselves from power. It uses the lives of strategists and historical figures such as Henry Kissinger as support. The book has sold more than 1 million copies.

The Art of Seduction was published in 2001 and explains the nine types of seducers as well as the aspects of attraction, authenticity, storytelling, and negotiation. Green again makes use of examples from historical figures to support the psychology behind seduction.

Robert Greene writes for The New York Times., CNN, as well as other major publications.

His book The 48 Laws of Power has been known to be controversial. It’s very popular and has been referenced in songs by Jay-Z, Kanye West, and Drake. Lucio Buffalmano, founder of ThePowerMoves, a website dedicated to power and power dynamics, wrote several articles on The 48 Laws of Power, including a critical one. 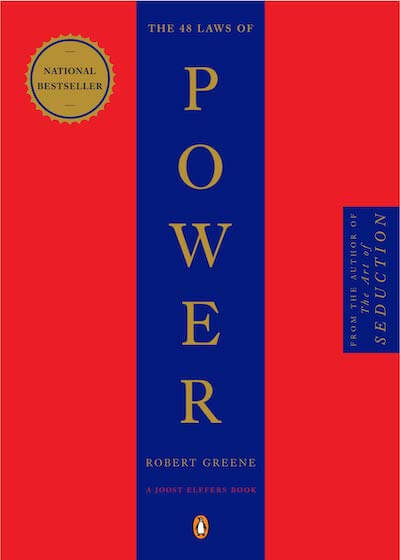 The 48 Laws of Power

Getting to Yes
Roger Fisher & William Ury
Influence: The Psychology Of Persuasion
Robert B. Cialdini
When
Daniel Pink
The Culture Code
Daniel Coyle
Great Thinkers
The School of Life